Birmingham: 5 Things To Look Out For 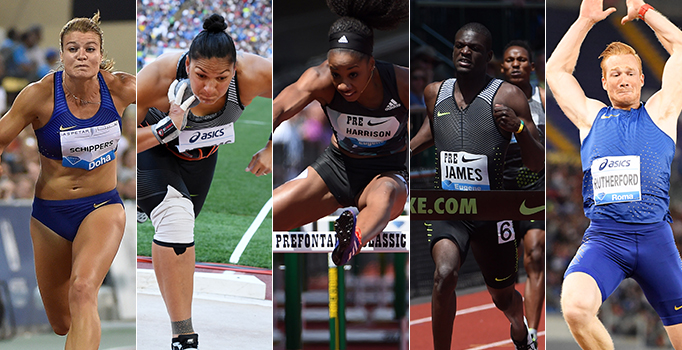 After a truly impressive Roman night of track and field in the Italian capital, the Diamond League race heads over to Birmingham for one of two UK-based IAAF Diamond Leagues this season. Here are the five things you won't want to miss from the Alexander stadium.

Birmingham welcomes the fastest woman on the planet this year as Dafne Schippers will line up in the 100m on Sunday's IAAF Diamond League. Having already ran an incredible 10.83 seconds this season, the reigning 100m IAAF World silver medalist will contest the likes of Michelle-Lee Ahye and English Gardener. Gardener ran a season's best of 10.92 seconds in Rome and is the athlete with the most Diamond Race points at Birmingham.

The women's shot put promises to be a world class competition with shot put royalty Valerie Adams contending with the U.S. athlete Tia Brookes and Hungarian Anita Marton who have thrown 19.48m and 19.22m respectively this season. The New Zealand shot put queen Adams has 20 Diamond Race points at present, however Marton is not far behind with an impressive 18 points.

The women's 100m hurdles will be a tight race with athletes such as Dawn Harper-Nelson, Brianna Rollins and Tiffany Porter. In the spotlight however, will be current world-leader Kendra Harrison who ran a storming season's best of 12.24 at the Eugene Diamond League, the second fastest women's 100m hurdle time in history. The world leader is also on top of the Diamond Race points table for the event with ten points, with Rollins in a close second.

The Alexander stadium will host pedigree quarter-milers such as Olympic champion Kirani James for the 400m. Botswana's Isaac Makwala will also run alongside his compatriot Thebe Baboloki who recently ran an a personal best of 44.22, as well as the local European silver medalist Matthew Hudson-Smith. Britons Jarryd Dunn and Rabah Yousaf will also compete in the event.

Makwala currently stands third in the Diamond Race with 9 points, and will be hoping to improve on that and catch up to Wayde van Niekerk who currently has 10 Diamond points, with Lashawn Merritt leading at 20 points.

5. Goodwin and Rutherford go head to head to fight for Diamond Race points

The men's long jump promises to be exciting as ever, with Olympic and World triple jump champion Christian Taylor going head to head with long jump Olympic and World champion Greg Rutherford. The Briton, who won the Diamond Race in 2015, took victory in the Rome Diamond League with a leap of 8.31m and in Birmingham will be aiming to beat American Marquise Goodwin who has jumped 8.45m already this season. Currently both Goodwin and Rutherford have ten Diamond Race points each, so will be battling out for the win and a further ten points to add to their collection.