An athletics party in front of the Opernhaus Zürich 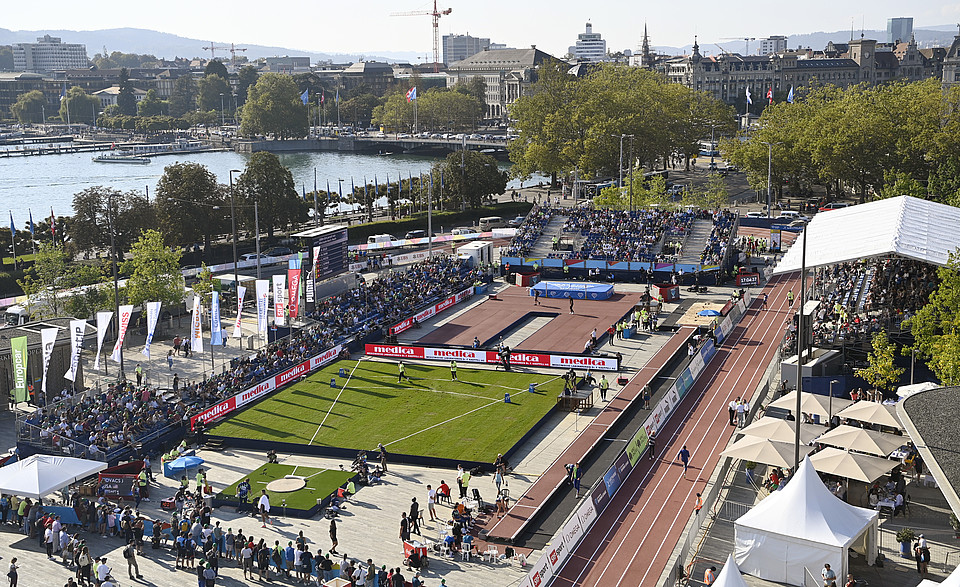 The stars of «Weltklasse Zürich on Sechseläutenplatz» were truly splendid ambassadors for the fascination of the sport of athletics on Wednesday night. All in all, seven diamond trophies were awarded. Shot putter Ryan Crouser (USA) and Mariya Lasitskene (ANA) both set new meeting records.

Zurich’s famous Sechseläutenplatz served as the stage for an exciting world premiere on Wednesday night. For the first time ever, a diamond trophy for a track event was awarded outside a stadium. The venue in the city centre – a 563m-long, temporary track and an arena for the shot put, high jump, and long jump competitions –, a wonderful atmosphere, and the evening sunshine created a unique backdrop for the first seven 2021 Wanda Diamond League final events.

The track, developed by Conica, was tested during two 5000m races. In the men’s race, eleven athletes, including Switzerland’s Jonas Raess, were hunting the diamond trophy. Berihu Aregawi prevailed in an exciting finish, defeating both Birhanu Balew (BRN) and Jacob Krop (KEN). Aregawi, who clocked 12:58.56, was the only athlete to finish the race below the 13-minute mark. Raess tried to keep in touch with the leading athletes, but eventually had to let them go. He placed seventh.

The women’s race was as exciting as expected – a gripping duel between the two top favourites Hellen Obiri (KEN) and Francine Niyonsaba (BDI). While Niyonsaba stayed behind for quite some time, Obiri took the lead towards the end of the race. Niyonsaba, a former 800m runner, ended up benefitting from her fast finish and snatching the win from world champion Obiri. Ejgayehu Taye (ETH) placed third.

A meeting record in the men’s shot put

2015 and 2019 world champion Joe Kovacs (USA) started out well, better than fellow countryman Ryan Crouser. After two attempts, he led with 22.29m. In the third round, however, two-time Olympic champion and world record holder Crouser left no doubt about his intent to win the competition. His 22.67m earned him both a diamond and a meeting record. Kovacs was unable to improve his result, but he did keep Armin Sinancevic (SRB, 21.86.) at bay and placed second.

The women’s shot put, too, was dominated by US athletes. Maggie Ewen won the competition in her first attempt (19.41m), defeating Auriol Dongmo (POR) and Fanny Roos (SWE). She was the only athlete with a result beyond 19 metres.

A high jump competition at the highest level

The women’s high jump is both extremely exciting and at a very high level these days. The best three competitors – Mariya Lasitskene (ANA), Yaroslava Mahuchikh (UKR), and Nicola McDermott (AUS) –tried to make things as difficult as possible for each other again, just like they did in Tokyo and at Diamond League meetings earlier in the season. At Weltklasse Zürich, the showdown ended in a new meeting record and a new world leading performance. Olympic champion Mariya Lasitskene (ANA) was the only one to clear 2.05m. Mahuchikh, the youngest athlete in the field and an Olympic bronze medallist placed second with 2.03m, beating Olympic silver medallist McDermott (2.01m).

A third and a first diamond

At the Olympic Games in Tokyo, long jumper Ivana Španović (SRB) had narrowly missed out on a medal, when she placed fourth. In Zurich, she managed to take revenge: Her 6.96m earned her a diamond, her third.  Khaddi Sagnia (SWE) and Maryna Bekh-Romanchuk (ROM) were close on her heels. Olympic champion Malaika Mihambo (GER) had to settle for fifth place.

In the men’s competition, Thobias Montler (SWE) kept getting better with each attempt. He started out with 7.72m, improved his result gradually, and then led with 8.15m at one point. His final attempt was even better than that. He won the first diamond trophy of his career with 8.17m. The two Swiss jumpers both had their best attempts at the beginning of the competition. U23 European champion Simon Ehammer placed fourth with 7.94m, narrowly beating Benjamin Gföhler (7.90m).