The Stars of the Olympics meet again at the Letzigrund Stadium 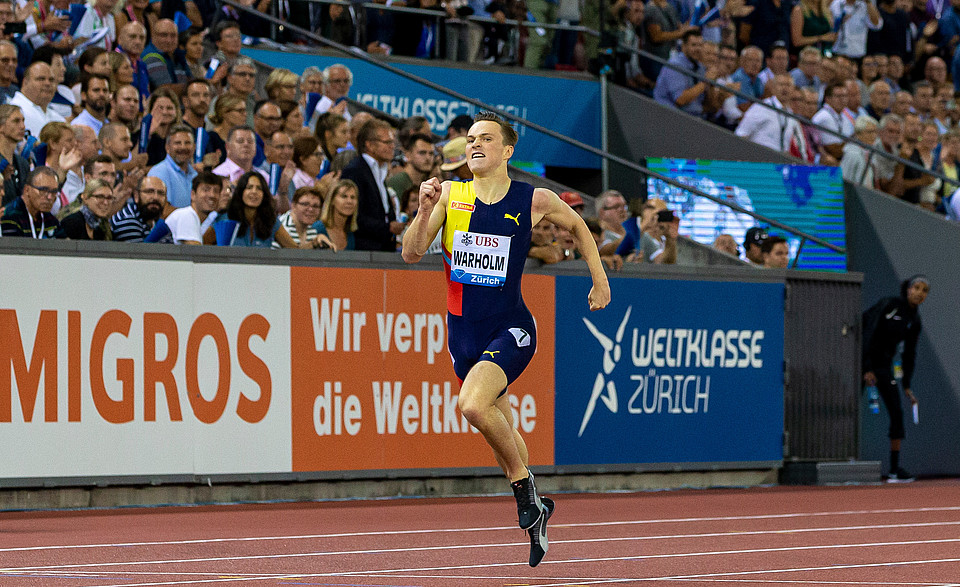 One month after the Olympic Games, the heroes of Tokyo meet in Zurich for another showdown. As many as 25 Wanda Diamond League finals will be held. On average, a new Wanda Diamond League champion will be crowned every seven minutes. Probably presenting the most action-packed programme of events ever, Weltklasse Zürich will feature 23 Olympic champions, 19 world champions, and eight world record holders. Lining up alongside them will be 11 Swiss stars, who all intend to give their very best at Letzigrund Stadium.

«Mondo» Duplantis reaching for the stars

World record holder Armand «Mondo» Duplantis (21, 6.18m) is a true high flyer. The US-born, Swedish athlete, defeated all his colleagues at the Olympic Games in Tokyo, at four Diamond League meetings, and in other 2021 competitions. In Tokyo and in Brussels, he was the only athlete to clear 6m. Olympic silver medallist Christopher Nilsen (USA, 23) and Sam Kendricks each won one Diamond League meeting in 2021. Kendricks, who turned 29 on Tuesday, will try to make up for missing the Olympics. The US star had been in quarantine during the Tokyo competitions.

If 31-year-old Sandra Perković succeeds to win her seventh diamond, she catches up with the present record holders Renaud Lavillenie (FRA, pole vault) and Christian Taylor (USA, triple jump), who both own seven diamonds so far. Perković has another score to settle: the 2012 and 2016 Olympic champion and two-time world champion had to make do with fourth place in Tokyo. Gold medallist Valarie Allman (USA, 26) and Yaimé Pérez (CUB, 30), who took second, had gotten in her way. On Thurday, the Croatian discus star will be out for revenge.

Yulimar Rojas at the top of her game

At the Olympic Games last month, she improved the world record to 15.67m in her final attempt and thus took the title, after winning an Olympic silver medal in 2016. And she was unbeatable in Lausanne two weeks ago: Yulimar Rojas, the 25-year-old Venezuelan, who is also a two-time world champion is at the top of her game. Probably her strongest opponent will be Olympic silver medallist Patricia Mamona (POR, 32), who had set a new national record with her first 15m jump in Tokyo. And Shanieka Ricketts (JAM), fourth at the Olympics and defending Diamond League champion, is looking forward to a rematch.

A boost for Ricky Petrucciani

Mathias Rusterholz’s Swiss national record 44.99 dates back to 1996. Maybe it is time. Ricky Petrucciani (21), who is a member of the Zurich track club came close, when he clocked 45.02 in his triumphal run at the U23 European championships in Tallinn, this year. On Thursday night, the Ticino-born athlete may get a helpful boost by his illustrious opponents, including Olympic bronze medallist Kirani James (GRN, 29) and three additional Tokyo finalists – Michael Cherry (USA, 26), Isaac Makwala (BOT, 34), and Liemarvin Bonevacia (NED, 32).

Competing at Letzigrund Stadium feels great to Germany’s Gesa Felicitas Krause – and she would like to show that in her race. The two-time European champion (29), who ran a national record in Zurich two years ago and won two world championship bronze medals, placed fifth at the Olympic Games in Tokyo. Peruth Chemutai (22), the first Ugandan Olympic champion, Courtney Frerichs (USA, 28), silver medallist, Hyvin Kiyeng (KEN, 29), bronze medallist, and the very young Mekides Abebe (ETH, 20), who placed fourth, had all thwarted Krause. Now, it is time for a rematch against the quartet. Gesa Krause considers Letzigrund Stadium her home arena.

Led by Olympic bronze medallist Ronald Levy, an entire pack of athletes intends to catch Olympic champion Hansle Parchment. After the Olympic Games in Tokyo, the Jamaican (31) had prevailed in Paris, clocking 13.03 and beating Devon Allen (USA, 26, 4th in Tokyo) and Olympic bronze medallist und Ronald Levy (28, JAM) in the process. But his pursuers, including Switzerland’s 22-year-old Jason Joseph (10th in the season’s top list) are getting closer. Joseph gets to run an Olympic final of sorts in his home arena, after missing the Tokyo final. Parchment, a psychologist, will give his best to hold the Swiss and the rest of the field at bay.

She has an impressive record: 28-year-old Sifan Hassan, who had fled Ethiopia in 2008 and now lives in the Netherlands, is the first woman to win Olympic medals in the 10 000m, 5000m, and the 1500m. Her races in Tokyo earned her two gold and one bronze medal (1500m). Faith Kipyegon (27) was the one who took the title in the 1500m, a triumph that makes her a two-time Olympic champion. The two top stars seem to take turns, both at championships and at meetings. In 2017, Kipyegon won the world championship title and came in second in Doha two years later, when Hassan snatched the gold medal.  Last week, Hassan ran a world leading time in the Brussels mile. Another duel is on the cards in the men’s 1500m: Olympic champion Jakob Ingebrigtsen (20, NOR) will be facing Olympic silver medallist Timothy Cheruiyot (25, KEN).

Johannes Vetter (28) has been the world’s leading javelin thrower for two years. In 2020, he shot to second place in the all-time top list with 97.76m. He has lived in the south of Germany since 2014 (in Offenburg, where he also serves as a member of the local council). He has collected two wins at 2021 Diamond League meetings so far, including in Lausanne. In Tokyo, however, he had to make do with ninth place, after facing problems with the run-up track. The new track at Letzigrund Stadium will not be an obstacle when he competes against Olympic silver medallist Jakub Vadlejch (CZE, 30) and several Olympic finalists.

Three athletes in this competition have already cleared 2.37m this year. One of them managed to do it on the most important occasion: Gianmarco Tamberi (29), the eccentric Italian who is coached by his father Marco, prevailed at the Olympic Games in Tokyo, partly because of the rule with regard to failed attempts. Belorussian Maksim Nedasekau (23), achieving the same height, took bronze. Ilya Ivanyuk (RUS, 28) had already cleared 2.37 in Poland in May. Tamberi, who used to compete wearing a half-beard had teared his Achilles tendon at the Rio Olympic Games in 2016. This year, he would like to collect a diamond to round off his successful Olympic season.

Elaine Thompson-Herah (29) is following in the footsteps of famous fellow Jamaican Usain Bolt. In Tokyo, she pocketed Olympic gold medals number three, four, and five. Later on, she ran the second fastest 100m race of all times in 10.54. She will be the toughest opponent for Switzerland’s two top sprinters. Ticino-born Ajla Del Ponte (25) and Bern’s Mujinga Kambundji (29) were both in the Tokyo Olympic final as well, placing fifth and sixth. And both of them run sub-eleven second times on a regular basis. The women’s 100m race features five Olympic finalists.

People in Kenya are very proud of Emanuel Kipkurui Korir (26). But he has tough opponent in his country: Ferguson Cheruiyot Rotich (31). In Tokyo, Korir came in first, Rotich was the runner-up. The ongoing duel between the two fastest Kenyans in the 800m, which is also about who is going to succeed world record holder David Rudisha, will continue in Zurich. Korir attended the same Iten school as Rudisha. Rotich changed his first name in honour of Manchester United’s legendary coach, Sir Alex Ferguson. Both of them will have to watch out for Marco Arop (CAN, 22), who defeated them in Lausanne.

Laps of honour for Lea Sprunger and Karsten Warholm

Switzerland’s Lea Sprunger is about to leave the big athletics stage at the age of 31, this year. After a successful career as a sprinter, she went on to take the 2018 European title in the 400m h in Berlin. Lining up with her will be her Dutch training partner Femke Bol (21), who won a bronze medal in Tokyo. In the men’s race, as expected, Norway’s Karsten Warholm (25) took Olympic gold. But he also ran a new world record! In Zurich, the toughest opponent for the two-time world champion will be Olympic bronze medallist Alison Dos Santos (BRA, 21), who won the Diamond League race in Brussels last week.

Switzerland’s crowd favourite and the Canadian Olympic champion will take centre stage in the 200m races. Mujinga Kambundji (29), three-time Olympic finalist this year and 200m world championship bronze medallist in 2019, had been the flag bearer for the Swiss team in Tokyo. Earlier this summer, she had won her first Diamond League race in Eugene. Her opponents at Letzigrund Stadium will include Olympic silver medallist Christine Momba (NAM) and two-time finalist Marie-Josée Ta Lou (CIV, 32). Just like Kambundji, Ta Lou and reigning 200m world champion Dina Asher Smith (GBR), André De Grasse (26) will compete both in the 100m and the 200m. An avid collector of medals, De Grasse won Olympic gold for Canada, 25 years after Donovan Bailey. In addition to claiming the 200m title, he took bronze in the 100m. In Zurich, Kenneth Bednarek (USA, 22), Olympic silver medallist in the 200m, might be close on his heels.