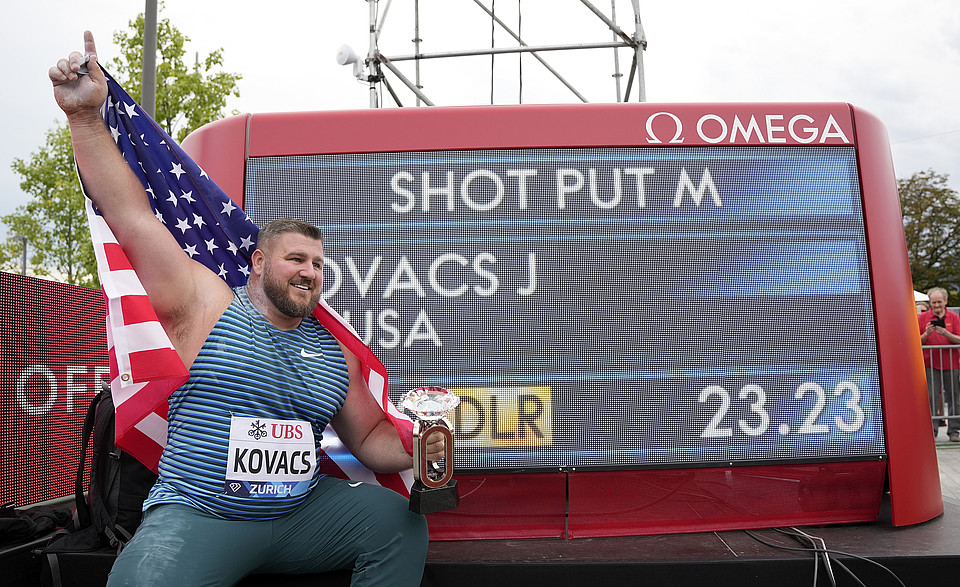 The athletics stars at Weltklasse Zürich on Sechseläutenplatz treated visitors to a great show. Joe Kovacs (USA) even set a new Diamond League record, only just missing the world record.

Passers-by were enjoying the high-level athletics event on Zurich’s Sechseläutenplatz for the second time. The 5000m runners on the temporary 563m track, and the field athletes in the extraordinary arena near the lakefront gave their all and created a great competition atmosphere in an extraordinary setting.

The first to shine in front of the Zurich Opernhaus was shot putter Joe Kovacs (USA). For the second time in two weeks, the athlete, who has roots in Hungary, defeated his usually dominating fellow countryman Ryan Crouser. And he did it in quite impressive fashion: With 23.23m, he set a new Diamond League record in his third attempt, missing Crouser’s world record by a mere 14 centimetres. He is now the second-best shot-putter of all times. Olympic champion Crouser is coming back from a Covid infection and several weeks of being ill. Still, he came in second with 22.74m.

Chase Ealey (USA) added the final touch to a perfect season. The shot put world champion continued her winning streak in the Wanda Diamond League. Her 20.19m earned her a Diamond Trophy. Ealey is one of very few athletes who remained undefeated in the Wanda Diamond series this year. Discus thrower Kristjan Čeh (SLO) might follow suit on Thursday night.

Kipkorir prevails in the 5000m; a strong race for Lobalu

The innovative temporary Conica track was put to the test during two fast-paced hunts for Diamond Trophies in the 5000m. The crowd on Sechseläutenplatz went wild when South Sudan-born, but Switzerland-based Dominic Lobulo was part of the fight to win the race. Kenya’s Nicholas Kipkorir defeated him only on the home straight along the Opernhaus. His winning time: 12:59.05.

The women’s race had been expected to be a duel between Olympic champion Sifan Hassan (NED) and world champion Gudaf Tsegay (ETH). In the end, it was world championship silver medallist Beatrice Chebet who claimed the Diamond Trophy. The Kenyan prevailed in an impressive finish and 14:31.03. Tsegay and Hassan had to settle for third and fifth place.

Trophies for Italy and Australia in the vertical jumps

Ever wondered what the perfect preparation for a Wanda Diamond League Final competition involves? At least for Gianmarco Tamberi, getting married and staying up all night celebrating in the days leading up to the competition seem to have done the trick. His attempts seemed lighthearted and relaxed. And as always, he delighted fans with his outgoing attitude. They were all on their feet when he cleared 2.34m and took the Diamond Trophy. JuVaughn Harrison, whose nickname “Mr. Jumps» refers to his talent both in the high and the long jump, contributed to the atmosphere of the outstanding event.

It is not the world championship silver medallist, the European champion or the 2016 Olympic champion who is taking home the Diamond Trophy in the women’s pole vault. The one to jump highest in the 2022 Wanda Diamond League Final was world championship bronze medallist Nina Kennedy. The Australian cleared 4.81m, defeating runner-up Sandi Morris (USA) by five centimetres. The fans on Sechseläutenplatz had also been cheering for local star Angelica Moser. The member of the Zurich athletics club cleared 4.51m, coming in seventh.